How To Deal With A Macho

How To Deal With A Macho 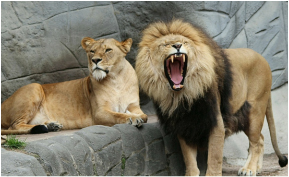 It is the middle of August, Leo time. In my last newsletter I told you about the encounter of my wife with a mountain lion almost in our backyard. Now, here is another Lion story.

You know that as homeopaths we use everything in this world as remedy. Be it plant or mineral, animal or even things like moon light, x-ray or ultrasound. Everything in our world has an influence on us and, in its energetic form as a homeopathic remedy, everything can heal us as well. So it might be no surprise to you that the milk of a lioness is also in use. Now let me tell you the story.

A middle aged woman came to see me because of a severe migraine. It had started after her first pregnancy, she said. So I was curious to find out more about this pregnancy. She was in a lot of pain and discomfort, and she really needed help from her husband. He, however, came home from work and demanded that she cook for him, serve him, and cater to all his needs. He was not willing to support her in any way that she would have hoped for. He was boss and did not need to do anything at home, no matter what his wife was going through. What ensued is easy to imagine: A long series of fights and struggles. What developed after that stressful time period was the migraine.

I listened carefully and after I had understood the problem, in my mind I turned to nature, asking: Who has the perfect solution for this problem? A lioness came to my mind. As you might know, the male lion is boss of a pride of females. Even though the females do most of the hunting, when the work is done and the prey is down, the boss comes and eats first. Besides that, he is more concerned with matters of holding his position of power and defending it against rivals than being the daily struggle for food. The women successfully fill that role.

Well, “I thought, a lioness knows how to be in peace with a macho.” I therefore prescribed a remedy made of the milk of a lioness which holds this energy. It served my client well. After a short aggravation the migraines disappeared. Much later I heard that during the following months she also found a new balance in her relationship.

What had happened? The lioness gave her peace with the woman’s situation. It is as if she had told the woman: ‘I live in the same situation as you, and I will help you to deal with it. You have me as your friend.’ Nature has a way of helping us to find peace with a situation. In our example, a lioness is in perfect harmony and peace with who she is and with the situation she is in. It is this peace and harmony that she is able to pass on to us. Once we found peace with the reality we are in, freedom opens up. Now we are able to make new choices: Do we stay, can we change, or do we leave a situation? The choice is now ours. As long as we fight what is, we are tied to what is. Fighting is a very hard and usually slow way of changing a situation. Fighting is also painful for everybody involved.

If you are struggling with a situation, if you are looking for peace, consider homeopathy. Homeopathy has the elegance of nature in curing. It offers peaceful changes.

Feel free to pass this newsletter on to a friend who you know is struggling. Give him/her my email address: Roland@VancouverIslandHomeopathy.com . Mother Nature is waiting for us to turn to her.