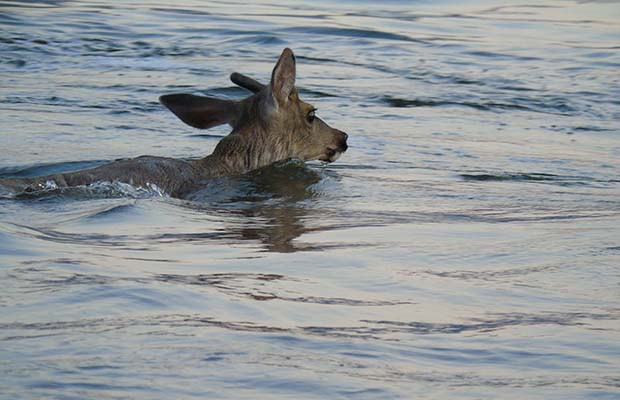 A while ago I was out with the boat with my friend Dave on Discovery Passage. Our intention had been to go fishing but I swear, there was not a single fish in the whole wide ocean that day. As the weather was beautiful, we still enjoyed our day, listened to the loud bark of the California sea lions until we could hear in between the less obvious raucous growls of the bigger Steller sea lions that a slight wind carried over to us from their rocky haul-out.

We were not far from shore when we saw an animal going into the water and starting swimming toward the open water. A fast glance through the binoculars showed that it was a deer, a young buck, horns just as long as its ears. We got a little closer and kept watching. To our amazement, this young buck swam from the mainland shore toward Vancouver Island! He clearly saw us but the presence of two humans on a boat did not distract him from the direction he had chosen.

Now, the Discovery Passage is where Vancouver Island is closest to the mainland. Where we were that morning, it is still a distance of two miles. For a land animal that is not equipped with fins or webbed feet, this is quite an endeavor. We watched him until he was out of sight. I am sure he made it to the other side.

When I thought about the event, I was even more amazed. Not only he picked one of the shortest distances across the water, he also picked exactly the right time, about 20 minutes before slack water. This way he could make it across without being carried south from the current where a few miles further the eddies and whirlpools of the infamous Seymour Narrows might have dragged him under. Even the big ships do not cross these narrows except during slack tide.

I have to say, I think of that deer often and I do admire it, especially  at  this time of the year as I ponder about my plans for 2019.