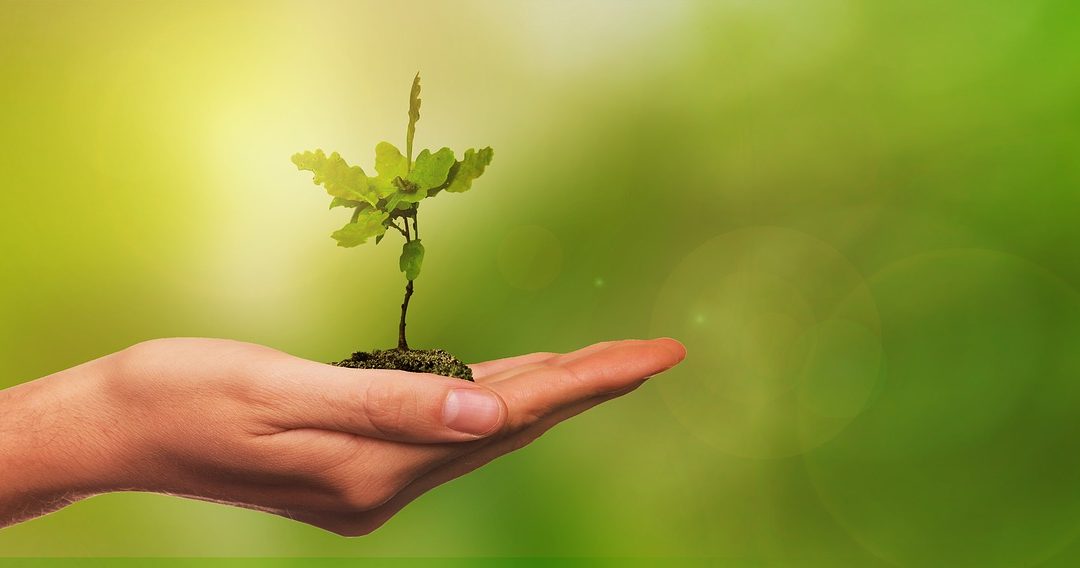 “A young Monk was standing beside my bed. In His hand was a small oak sapling, which he held out to me. He was saying ‘take this as a symbol of your inner wisdom, strength, and resilience, your divine being is always with you’.

A beautiful luminous light surrounded his hands.
Beneath his hands was the earth, as you might view it from space.

He placed the sapling on top of the earth and said ‘this is a symbol of the divine wisdom, strength and resilience that resides in all beings.   Reconnecting with that part of ourselves, allows the flow of energy between heaven and earth. As the tree branches touch heaven, the roots grow deep in mother earth, connecting Heaven and earth.

As more people reconnect with the divine part of themselves so the collective consciousness will grow and expand around the planet, allowing unity and healing on many levels.’

I saw the world slowly being covered with little tree saplings.”

I listened to my client in fascination as she shared her dream. She was recovering from a Covid-19 infection that she had gone through in the weeks before. I had been worrying about her, she was in an age group that made her vulnerable to the disease and she had gone through quite a severe process. She gave me permission to share this with you all.

“In the next night the Monk appeared again, this time holding the earth in his hands, with the sapling sitting on top.

He told me to place it in my heart. I was protesting that there was no way the planet earth could fit into my heart! At that moment it did just that, it merged with my heart and I dissolved into this great expanse of light, literally dissolved, there was no ME, just energy and oneness.

Again in another night the Monk appeared in a dream hovering above me, he was holding his hands out to me. I hesitated for a bit then held my hands out and he dissolved into my Third eye.

The last time the monk appeared with the sapling again. It had grown much bigger.

He told me ‘take the essence of this tree into your body, your being, feel its strength, learn from it. You are as if the Oak, mighty, strong, resilient. This is who you are, who we all are, always connected to the divine.’ ”

I was deeply touched, I was in awe listening to the beauty and the wisdom speaking out of these dreams.

My patient had gone through quite an ordeal. Two weeks ago it had started out with flu symptoms and deep grief. When the grieving was done, the pain in the bones was excruciating. After that, anxiety and fears came up, especially the fear of having to die alone. Then weakness and brain fog made it almost impossible to even think. She could not do much anymore. She had to give up control and surrender to the body, to the innate healing wisdom that our body holds as a result of hundreds of thousands of years of human evolution which included going through all kind of infectious diseases. During the whole process she had more or less high fever. Finally fever and weakness subsided and she started to recover.
I had been with her through all of it, accompanying her with homeopathic remedies that mostly brought immediate relief.

When I look at this process, I cannot help than to think of it as an initiation.
The grieving was like a cleansing, old losses had to come up and wanted to be cried about. Grieving the past creates space for the present and for the future. In that space fear could arise, it had to be faced and integrated. The greatest challenge was surrendering to the body’s innate healing ability. Giving up control is hard, yet it had to be done. When all of these stages had been gone through or should I say, suffered through, she received the blessing and teaching in her dreams.

What an amazing journey! Who would have guessed that the corona virus would guide through an initiatory process? And what a deep learning!

When we get a deeper relationship to our body, we simultaneously develop a deeper relationship to Earth. Why is that? Because your body is a part of the Earth, your body is Earth. They follow the same laws, the same laws guide a process of healing in our individual bodies and in the bigger body of Earth. This is why when we embody more into our body, we also come closer or even become intimate with Earth. This is what happened here.

I am still in awe. During all my years in medical school, I have learned everything that can go wrong, everything the body does wrong in an illness. Not one word was said about the gain of having gone through something. As a medical student you could have the impression, that diseases only are a mistake of life that we need to correct. That there is meaning in suffering, that there might be even wisdom in a disease, that a disease can be a teacher, I had learned much later. I have experienced it over and over again in forty years of practicing.

Krishnamurti said: Life has an astonishing way of taking care of you once you no longer mind what is happening.

Rumi reminds us: Everything that reaches you today is a gift and a message from Me.

Somewhere there is a fork in the road. This is where we need to choose our direction. Do we fight the virus as if it would be a curse, or do we believe that everything that reaches us today can be a gift of the Divine? If we believe in the latter, then we can relax and trust the process, trust that there is wisdom in it, no matter how it will turn out. This is not a naïve new age philosophy that wants to paint all life in pastel pink and blue and yellow, this is the dead-serious question in what we trust. A Yes to life inevitably requires a Yes also to its ending. The many people dying from Covid do not allow us to ignore this truth.

In that spirit I give thanks to my client who allowed me to support her on her journey and who gave me permission to pass on the gifts she had received to you.