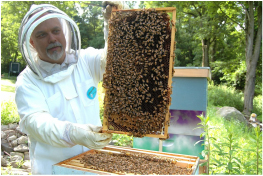 I used to be a beekeeper for many years back in Germany. I still relish the memory of a beehive buzzing contently in the evening of a warm spring day. The bees had brought in pollen and nectar all day long and after their work was done, they filled my heart with their warm buzz.

Bee keeping changed when exotic parasites like the Varroa mite were introduced. Suddenly life was not so peaceful anymore and the bees had to fight for their survival. Many beehives died. Different beehives behave differently, they even have a different character. Some are very effective in producing honey, others not so much, some clean their hive perfectly, others tolerate more waste in their home, some were more aggressive and stung the beekeeper. Of course we liked the peaceful ones, as it made working with them easier.

However, when they were fighting for survival, the aggressive hives fared much better than their more gentle sisters. They cleaned their hives more aggressively, they fought intruding wasps more aggressively, they even got rid of parasites more effectively. How amazing! For a hundred years beekeepers tried to breed bees that were less and less aggressive and now we had to see that what was easy for us, was absolutely not healthy for the bees.

Being nice is good, isn’t it? Or can we be too nice, like the bees?
I actually think so. Like those bees, we need to be able to speak a clear NO when necessary.

I remember one of my homeopathy teachers who was an old pediatrician with a lifetime of experience in treating children with homeopathy. A mother with her little three-year-old son came into her office because the boy had been coughing for months. He was a sweet little guy, very calm. When mom put him somewhere, he stayed there and looked around, he did not complain. After she checked him out, my old teacher said: “So let us de-nice him.” She explained to the surprised mom that with the help of the homeopathic remedy Calcarea carbonica the boy would stop coughing but he would also become more lively and a little more challenging for the parents. This is exactly what happened. The boy stopped coughing and at the same time he became less “easy” to be with. When his immune system learned to say No to intruding germs, he also started to say “No” more often to his parents.

Another friend of mine is a Sufi, his spiritual path is the path of the dancing dervishes that was founded in the 13th century by the Persian mystic and poet Rumi. In their prayers one line keeps repeating itself over and over again: La elaha ela allah. Translated usually as: There is nothing else than God. However the Arabic phrase starts with an emphatic La which means No. Translated correctly it would mean: No, there is nothing but God. So this basic statement starts with a boundary: No!

We need boundaries. There is no health without clear boundaries. Our immune system is such a boundary. It scrutinizes every virus and bacteria that found its way into our organism and asks the simple question: Do you belong here or not? If it is a germ that would hurt our own organism, then it will be killed. No being nice here. This is how we keep our body clean and healthy.

Have you ever seen pictures of temple guardians in front of Asian temples? Vicious looking statues scrutinizing everyone who walks in the temple. Our body is the temple of our soul and our immune system is its temple guardian.

When we deny boundaries on the soul level, when we are always nice, we might compromise our immune system. It does not have permission to do its job effectively if we do not respect our own boundaries on a mental or spiritual level.

Let us be true. Truth is a higher value than being nice. And first, we have to be true to ourselves.

There are many paths to truth. Homeopathy is one. If you would like to have support for your immune system or for having better boundaries, give me a call (250-650-1662) or send me an email.