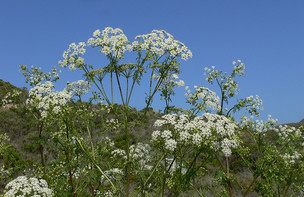 A group of people are standing around a stately herb, six feet tall with tiny white flowers that tell us that it is a member of the carrot family. The reddish spots on its trunk reveal that we are dealing with a very special herb here. It is Conium maculatum, the Poison Hemlock, one of the most poisonous plants in North America, deadly poisonous actually. Here it grows almost unnoticed around the garbage bin behind a mall in Victoria.

We are on a Nature Walk through the city. The Poison Hemlock made history: The famous philosopher Socrates died from it. He taught the people in ancient Athens a new way of critical thinking. The city council did not like it. They accused him of spoiling the youth with his teachings and not respecting the gods of Athens. He was found guilty and sentenced to death. Socrates accepted the sentence and drank a mug of Poison Hemlock.

What a story! What a precious reminder of how deadly poisonous our beliefs, religious greed and philosophies can be. How many wars have been fought, how many people were willing to kill and to give their life believing that their religion, their world view was superior to somebody else’s! In nature this does not exist. The openly aggressive lion lives more or less peacefully in the same world as the hidden snake, none tries to convince the other, none tries to destroy the other in order to be right.

This is what I love about nature. Whenever I am in ceremony to prepare a new remedy, I learn a new way of looking at the world. Every single ceremony shatters my world view and teaches me that it is possible to see things differently. Gold taught me that only those things have worth and value which last, which do not change, and it made sense to me. Everything that was not eternal simply did not seem to be true. Later on I listened to Silver. It put my world upside down. It showed me the preciousness of all things that are temporary. “This moment right now, it told me, is so precious because in the next moment it is over and will never come back.” Through the eyes of the Silver, the eternal truths of the Gold were simply boring and not worth considering, through the eyes of the Gold the truth of the Silver was an illusion! Both are true depending on what position you are looking at life from.

In nature there are as many truths as there are creatures. Each animal, each plant, each mineral has its own truth. They do not fight each other, they balance and complement each other. Together they weave the intricate beauty of the fabric of our life.

The next time I want to be right, I pray that I will remember the Poison Hemlock. Being right and with that making somebody else wrong, is a poisonous attitude. It kills. If you ever tried to be right in a relationship (I am afraid that I might not be the only one that tried this), then you know what I am talking about. It kills, first of all it kills relationships.

Nature has a different way of being right. The lion is right and the snake also. The truth of one creature does not negate a different truth of another. All truths seem to be situated on a circle, each truth is balanced by another truth on the opposite side of the circle saying exactly the opposite. This is balance.

If your life or your health is out of balance, consider to try homeopathy.
If you feel attracted to experience a communication with nature, contact me and ask about a Shameeah workshop.
Send an email to Roland@VancouverIslandHomeopathy.com.