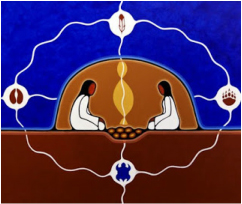 Many years ago I learned the word Niksookwa. What that means is All My Relations. I was living on the Blood Reserve in Southern Alberta back then, and my adopted father Naamoo told me to say this whenever I entered a sweat lodge for ceremony. So I did. I said it every time when I entered the sweat lodge, just like everybody else did. Years later I understood its importance. When we enter a space of healing, we acknowledge in saying All My Relations that we do not heal just for ourselves but for all relations.

Let me give you an example. A while ago I had a patient struggling with Crohn’s disease which is a chronic inflammation of the bowels. In the beginning he was only concerned with his own healing and the progress was slow. But once he realized that with his healing he was impacting the whole family and all the people around him, the healing reached a whole different level.

Initially his digestive problems were a nuisance for him and the visits with me only an annoyance. However, he soon realized that not only his bowels healed but that in the same time his relationships changed. He had a better relationship with his wife, he was more patient with the kids, a while later he even got along better with his colleagues at work. Now coming to see me was exciting and he pursued his healing much more energetically. It was fun now. This is it what All My Relations means.

As you are struggling with a health challenge, I really invite you to consider all your relations. Know that you do not heal just for yourself, you also do it for the ones you love. With your healing they heal with you.