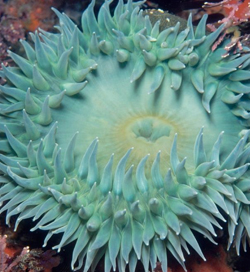 How to Bring Fire into the Water

No, it is not about making firewater but don’t be disappointed! It is about a C4-trituration of one of the most remarkable creatures of our coastal waters. A proving of Giant Green Sea Anemone was conducted in the Vancouver area in 2005, which Cynthia Shepard published in a wonderful article in NASH’s American Homeopath in 2007. It is my hope that the following information gathered during the trituration will serve to complement that body of knowledge and further expand our understanding of this creature and the healing, it offers as a homeopathic remedy.

Now here is what happened on our trituration weekend:

In C1 and C2 there was a marked unwillingness or lack of ability to communicate and to connect with other people. We were in a dull trance, as though floating in our own inner world completely disconnected from the world outside. We had a strong desire to be alone. We felt tired and weak as well as a lack of energy along with confusion about time and location. In general, it was a gentle state, in which we surrendered to a dull nothingness.

There was fear of sharp and pointed objects; even the rectangular corners of a house seemed to be painfully threatening. We stumbled when walking and had difficulty writing, due to awkwardness in the use of our extremities.

The lack of connection between the participants in the group was so extreme, that even in the break everyone did his own thing. There was little communication, which is very unusual for that kind of an event. Feelings of sadness and loneliness came with the lack of connection.

Even though the energy felt very soft and gentle most of the time, there was at times a marked aggression present. There were visions of fire, a rocket starting, and a cannon with a human inside as cannonball, being attacked with arrows and spears and even the desire to hurt somebody. These feelings demonstrated a strong presence of aggressive impulses within this mostly gentle energy. These polarities of gentleness and aggression also lacked connection.

C3, the mental level of the process usually yields some clarity. Not so in this trituration. The brain fog was complete, our mental and intellectual abilities gone. There was a mental dullness and even an aversion to talk at all. We had hardly any energy. It felt like being alone on a hot summer day, absolutely bored and the sun draining what energy was left. We had the desire to be still, not to move, even to stop breathing.

C4 finally brought resolution. In this level we experienced the extremes brought together. Aggression and self-surrender were no longer contradictions. Love and sexual aggression felt perfectly in harmony; water and fire seemed not to exclude each other anymore. The lack of connection and sleepiness were gone. Heat and sun were comforting rather than draining. “I can be a flower child in a graceful dance and in the next moment be a warrior ready to kill. It is all one dance in perfect beauty and selfless innocence.” This was an expression of the final harmony we experienced.

The Giant Green Sea Anemone can help us to connect opposite extremes of a polarity, to integrate the fire into the water, which before seemed to be impossible. In this harmonious state we can bring the masculine spark, the fire, the aggressiveness into a feminine space of surrender and beauty. The two energies, which seem to exclude each other, are connected, the masculine now supporting the feminine. The feminine without the spark of aggressiveness can get drained, loses its vitality, its energy. The masculine without the feminine can end up in destructiveness. Together they create a sparkling beauty, which is at the same time gentle and ready to fight. Overall it is a feminine energy with the willingness to use its masculine hunter/warrior energy at any time.

Surrendering only to the dance of the waters and waves, to the mesmerizing and soft rhythm of the tides, the breath of the ocean, can cost us our stamina and vigor. If the waters of emotions within us get stuck or rise up in chaotic turmoil, we would have a hard time coping. We would either collapse energetically, or lose contact with others and withdraw. Both happened in this trituration. The energy of the Giant Green Sea Anemone helps us to integrate the ability to fight to save our presence in the world.

I highly recommend reading Cynthia Shepard’s introduction to the proving: www.homeopathycourses.com/pdf/GiantGreenSeaAnemone.pdf
The biology of this animal, particularly the mechanism of shooting nematocysts like poisonous arrows into the body of its prey, sheds light on many of the experiences of the trituration. None of the participants knew about these things before C3.

According to our experiences in the trituration, the patient who would require this remedy, might look like this:

He/she runs a more feminine energy, being very much affected by what is going on around her, from other people’s words or actions. They would respond to stress with the desire to be alone, with withdrawal and some outbursts of anger. Anger and gentleness would be very much disconnected, the inner disconnectedness with themselves being reflected in the outside disconnectedness from other people, from the “real” world. They might have a hard time coping with what is asked of them in their daily life. This would result in an energetically drained state, a collapse of vital energy, resulting at first in sleepiness, tiredness, lack of interest, and later in all kind of physical problems i.e. increased appetite, leading to overweight etc.

The Giant Green Sea Anemone helps to integrate fire energy into the predominant feminine flow and gentleness, thus giving it tension, not the tense rigidity of apprehension but the relaxed ability to “shoot” at any time. This is possible, even requires one to be “out of one’s mind,” because thinking about fighting would make us tighten up. Yet this creature teaches us to be completely in tune with the rhythm of life, to be completely relaxed in the moment, with the fire inside awake, making absolute presence and vigilance possible, clear awareness of what is going on and the readiness to react instantaneously and un-mistakeably. Anthopleura could be a deep remedy following an acute prescription of Staphisagria.

The content of the previous paragraph are merely ideas that have to be proven in our homeopathic practice. I would appreciate it if homeopaths would document their experiences with this remedy.[/vc_column_text][/vc_column][/vc_row]