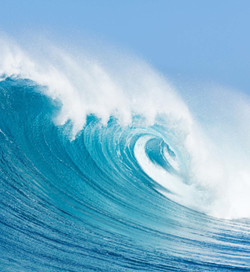 The Ocean is the basis, the source of life. The Ocean gifts life with body/substance/form. In its endless timeless space we feel distant from each other, if not outright lonely. The Ocean contains all opposites, for example birth and death, beauty and terror, softness and pain. It contains the sum of all. Its overwhelming power defines and terrifies us (the “dark forebodings of a bitter ending”, the “feeling of a sleeping monster”). The Ocean is a portal to the cosmos.
Hearing is heightened. There is extreme sensitivity to noises.

In C2 the Ocean overpowers us and drags us down into its dark depth.
While it was perceived as the body of life in C1, now it becomes the connection between form and formlessness. It is also connecting the core of the earth on one side to the universe on the other. In it “earth, water and salt are being combined into a crystalline center”. For the woman it is possible to become one, to transcend the limits of her identity. Since logic and orderly thinking was impossible at this C2, once confronted with it men tend to focus their awareness on the portal to the cosmos and escape into mental realms. Sexual difficulties are one expression of the theme of incompatibility between the feminine and the masculine.

On the higher level the feminine Ocean and the masculine mind (intellect) meet as polarities and are separate. A deep encounter is only possible through love. Only love can overcome the opposite principles. The now possible union creates spiral energy movements. Substance being permeated by Mind represents the re-connection of what was formerly separated. “This is the chalice of knowledge”.

In C1 we were victims of the overpowering Ocean.In C3 the Ocean tells us that it serves us: by giving substance to our creations, it gives birth to them. This way, for example, our fears can bring forth the monsters of the Ocean.

In C1 the separation from unity took place in the Ocean. In C4 the Ocean is the gateway for re-connection. A female participant steps through Love into the masculine mind and returns enriched to her feminine pole. Another female participant unites deeply with her femininity at the bottom of the Ocean and her femininity starts to blossom. One (male) participant matures through the union with the Feminine and can now take on responsibilities in a loving way. Everyone shared the loss of fear by connecting with the Ocean. While the empty space in C1 was frightening, now we feel safe.

The C5 level is about the meaning of the power we are dealing with for the collective.Here we received very individual messages from the Ocean of how each of us was meant to contribute to the collective.Two participants were asked to take on the care for the Earth and our fellow residents, the plants and animals. Twice it was about establishing a love-relationship with the Ocean incorporating new qualities. One female participant experienced lovemaking with the Ocean, the Ocean embodied as male lover. (Despite the female nature of the Sea, many Gods of the Ocean were perceived male, like Poseidon or Neptune). One participant received the message that it is not anymore about being the son of the Earth, but that Earth and Ocean need his qualities as mature grown-up man to take on loving and reliable responsibility for the big picture.

Two participants experienced that their individual healing process became a contribution to the collective picture.[/vc_column_text][/vc_column][/vc_row]