(Euscorpio italicus)
Summary of the Trituration on October 6-7, 2007, in Calgary, AB 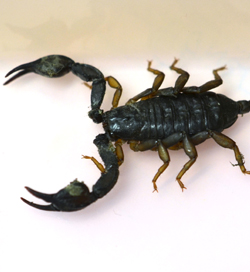 In all four levels this scorpion was about emotional issues. Especially in C2 we felt heavily burdened, yet we already could see that it was fear which turned emotional reality into a burden.

Feelings were overwhelming, we felt flooded from uncomfortable emotions like:

We all judged our feelings, felt bad about having them, thus rejecting them which made the load almost unbearable. And we had to realize that we were very busy being what others wanted us to be! Fear felt like a poison in one’s heart, fear poisoned all joy.

“Then the scorpion stung me in the area of my right kidney. Suddenly all the emotional turmoil settled, stillness and calmness followed these emotions”. None of the emotions disappeared nor was there any avoidance or moving into less painful mental areas. What had changed for us was simply that there was no judgement anymore. And with the judgement the drama disappeared.

“I can see every minute detail like an eagle.” (Interestingly in astrology the eagle symbolizes the scorpion after having gone through transformation). We could completely accept all our emotions, could feel them clearly, articulate them precisely and communicate them fully without holding back anything. Nobody was interested in explanations or needed any justification to allow him\herself to feel a certain way. Nothing else mattered than the naked truth.

Communication was brutally honest and mercilessly true, no hidden agenda, no being nice. In a dream one participant was posing for a photo shot in front of a grave; the photographer gave her a bouquet of flowers to hold so the picture would look nicer; yet she answered: “No! Take a picture of me in front of the grave without flowers, just as it is.” No adornment, no decoration. Truth is truth.

It was challenging to leave old patterns and habits behind; a participant saw a soldier with a parachute jump out of a plane. It was about leaving behind old belief systems, taking a step into the unknown, into freedom.

Clear, complete and open communication triggered a transformational process. We could feel the burden of unspoken emotional truth being taken away from our shoulders. All heaviness was gone, we felt liberated and free and a while later even joyful and playful. Happily we watched leave those cozy, comfortable, pastel colored romantic illusions which were based on the fear to see and express our emotional reality as it is.

Fully empowered we were ready not only to step into our lives but even to be our fate ourselves. No waiting anymore until necessity and distress would force us to move, by now we had surrendered totally to truth and transformation.

After having accepted our truth and after having consequently gone through our own transformation, in the end we were enabled to stand for truth also on the collective level in representing the scorpion energy and to be catalysts for the global shift which the universe is waiting for us to carry out.[/vc_column_text][/vc_column][/vc_row]