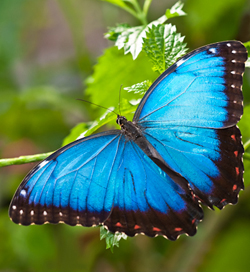 Besides a group of 6 participants in Calgary there was a group of 5 people who triturated the same butterfly at the same time in Germany. In this summary I will combine the findings of both groups.

The C1-level deals mainly with how each participant sees himself in the energy of the substance triturated, in our case how we see the aspect of ourselves that shows up in resonance with the Blue Morpho. C1 is also the level where we experience the most physical symptoms in general. The most striking feature in the Morpho C1 was the polarity that showed up in the issues we were dealing with. The issues varied, the conflict in the polarity however was common for all.

Some examples of these polar pairs are:

Interesting that even the physical symptoms that showed up in C1 were unbalanced in that way that they all were one sided! (Itching right face, itching right palm, pain right shoulder, heaviness right arm).
There was a marked desire for change, for example to have a new hairdo or to wear a new style of clothes. As a consequence of changes, the themes of parting, leaving, letting go showed up, also the final letting go in dying.

We felt extremely vulnerable, even threatened and not being able to defend ourselves.Worries about money came up, fear of being used, being abused, being eaten up, again without being able to do anything about it. Then the sensation of being attacked, being bumped, bruised, crushed or even stabbed with knives. In all these situations we felt like victims. It culminated in the fear that we might die before we have reached the goal of our life.

On the other hand there was a marked aggression, expressed either in a primitive language and swearing, or somebody else felt like smashing the porcelain bowl with the pestle. This aggression could also be experienced as directed towards oneself: “I feel like ripping myself apart, like mutilating myself.”

In C3 we reach the mental level. Surprisingly many physical symptoms showed up, the most constant of it being a pressure in the head (more than half of us felt this). It was also surprising that not much mental activity was going on at all in our two groups! Many rounds were empty, it was boring. We got the feeling like waiting for something unknown to occur.

We were unable to think, our brain did not seem to function as usual. It felt more like a physical problem that was at the cause of it. Some of us experienced themselves as hardly being conscious or even being in a state of coma. For others, thoughts were confused and chaotic. Our consciousness seemed to be scattered, some parts of it being in different places and even in different times. We felt restless and discontented.

In C4 we reach the spiritual level and it is there that we mostly find the solution of the problem we had been going through. This was the first level where a certain connectedness within the group showed up. We were interested in the other people, watching each other. Only then we recognized that this had been missing before, that each of us was going through his process as if we were alone. However we had not noticed an emotional feeling of loneliness with it.

Again the theme of changes came up strongly, often these changes felt painful. Leaving home, leaving people, leaving friends or family, changing jobs. We still were restless. Home was another topic that was important. Leaving home or looking for a home. And the mysterious answer: “Home is transforming. It is not what we thought it might look like.” The changes culminated in images of destruction, an end time scenario of global disaster. One participant saw spacecrafts coming to take people home. Again the question: Where is home?

At the end of C4 there is always the question: Are we done? Do we have a perfect remedy which holds not only the symptoms of the problem (C1 to C3) but also the energy of the solution (C4 or sometimes C5)? Here we had to see that we were not done yet. Most of us were still caught up in struggle and pain. In addition new levels of collective importance came up (global destruction), that pointed towards a C5.

So we decided to go ahead with the trituration of a C5 (collective level). This level felt much more gentle than the other ones. We found “home”: Safety in constant change, a resting place in constant motion. This is what we could rest in, what we could rely on. What we had seen being destroyed, broken to pieces, scattered, here we saw the pieces coming together again, however not in the old form and shape, but the pieces formed something completely unexpected, something new. It was not that the old wounds would have healed. We could see things from a higher perspective, we could see that, what had seemed to be pain and suffering on the lower levels, that it was part of a bigger beauty, was part of a bigger perfection without needing any healing.

Healing in the energy of the Morpho is taking place on another level than the original problem was. The most far reaching vision that came up was, that the blind will be given new eyes, which does not mean that the old eyes would be healed. It meant that there will be a different way of perceiving, that we might be given senses that we cannot even imagine so far. Now we felt peace, now we could see the beauty of it all and we knew, our remedy is perfect and our inner process came to a conclusion.

Thoughts about the Morpho after the Trituration

In the energy of the Morpho it was not about healing as we usually understand it. It was not about fixing a problem, healing a wound, restoring an old state of integrity. All the problems and the suffering of the lower levels were still present in the end. Only, in C5 we could look at it from a higher level and see the bigger beauty. What we experienced as suffering did not change, it simply revealed its harmony in the bigger picture. In that way the Morpho did not teach us about holding things together to keep them from falling apart, it is not about stopping destruction and surely not about opposing death. The gift of the Morpho was on one hand to allow us to see the perfection of this process in the larger context and on the other hand to allow us to see how things are coming together again in a new form. It is understandable now that so many fatally ill children are painting blue butterflies before they die. The blue butterfly gives them peace on this path without changing it. The movie “The Blue Butterfly” is a good example for that.

In the hand of homeopaths it could possibly be a good remedy for children with severe physical damages that cannot heal anymore, for example brain damage after a birth trauma, brain damage after vaccination, genetic disorders etc. Some of these situations we cannot change anymore, in some cases healing on the physical level might not be possible. This is where the Morpho can give us support in letting us understand, that this individual suffering is in alignment with the bigger beauty of life and does not even have to change. A lesson we have an incredible hard time accepting as adults. Children often do amazingly well with that. What came up strongly for me during the trituration was, that butterflies in general might be helpful in problems after vaccinations. As a boy I collected all kinds of caterpillars to watch their fascinating metamorphosis to a pupa and finally the miracle of seeing the butterfly emerge. I always was shocked that half of the caterpillars I had picked up in nature never made it to a butterfly (see in C2: fear not to reach the goal) because an ichneumon, a tiny parasitic insect, had laid its eggs into the live caterpillar and its larvae were eating it gradually up from the inside. It reminded me so much of a child being vaccinated (see again C2: not being able to defend yourself) and having to deal with a foreign energy within itself.

The final vision in Morpho energy is: healing will look different than what we expected. Healing in Morpho means letting things fall apart, allowing life to take its course, allowing it even to end, in order to experience healing in the rising of something new, of something unforeseen, to experience healing in a transformation. In that way the Morpho’s name is perfect. It means: the changed one.[/vc_column_text][/vc_column][/vc_row]