A Shameeah is a sacred ceremony of communicating with nature, the mechanics of which come from homeopathy, the energetics from alchemy and the ceremonial part comes from the wisdom of the indigenous peoples.

The ancient Arabic word Shameeah itself refers to the origin of alchemy in Aarabic cultures. It describes the process of transforming the often raw action of a substance into a medicine that can heal. In the tradition of Native peoples this was done through prayer and ritual. In a Shameeah it is done through the alchemical process of energetic transformation.

In a Shameeah ceremony we rely on our inner sense, our perception of subtle energies in our body, in our emotions, our mind and in our soul. We are the students, we listen to what nature shares with us.

So we have to be as quiet as possible in order to hear. Nature does not yell at us. Mostly she just whispers.

This time we will listen as to what the Sugar Maple has to share with us. This tree is an icon of Eastern Canada, deeply interwoven with the history and culture of the people who inhabit this land. On the physical level,the Maple gives us maple syrup, firewood, and wood for carpentry. Let us see what it has to share with us on the levels of subtle energies, on the emotional, mental and even spiritual level.

Scroll down to learn more… 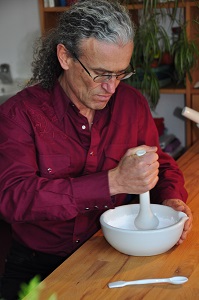 What participants have to say:

This has been the most profound experience for me in this lifetime. The sharing of the ancient wisdom of Dolphin touched me at the deepest levels of my spiritual being. Working with this energy at this vibration has been a dream too long forgotten. The personal information that I received is exactly what I need to move forward now, and create not only my reality, but to serve my life purpose.

In 1992 I connected with Native American medicine people and was swept away by the combination of of spirituality, healing work, self growth and the close connection to nature, which the path of the Pipe and the Sweatlodge incorporates. For several years, I lived on Blackfoot Reserve in Alberta and with the Huichol people in their remote home in the mountains of Mexico. I followed the teachings of the elders, was part of the sacred ceremonies, and learned to communicate with the natural world.

For years, I worked as a surgeon and then ran a successful family practice. Being part of the conventional medical system, I got to know its achievements and discovered its shortcomings. What disturbed me most was the fact that people were treated from a very mechanical perspective. A problem was fixed rather than a person cured.

I was exposed to homeopathy early in my medical career. I was fascinated by its elegance, its congruency with spiritual teachings, which I already I already had studied in my late teens, and of course by its powerful efficiency, which I was allowed to witness daily even in severe diseases. For more than thirty years I have been practicing homeopathy now, still I enjoy the healing journey of my patients. I never get tired of this fulfilling work.

In the last twenty years C4-homeopathy and Shameeah, with its emphasis on the spiritual aspect of healing, has become the major focus of my homeopathic research because of its unsurpassed opportunities for healing and understanding.

Sign up for my newsletter and receive insights and information about nature, healing, spirituality and homeopathy.

You have Successfully Subscribed!